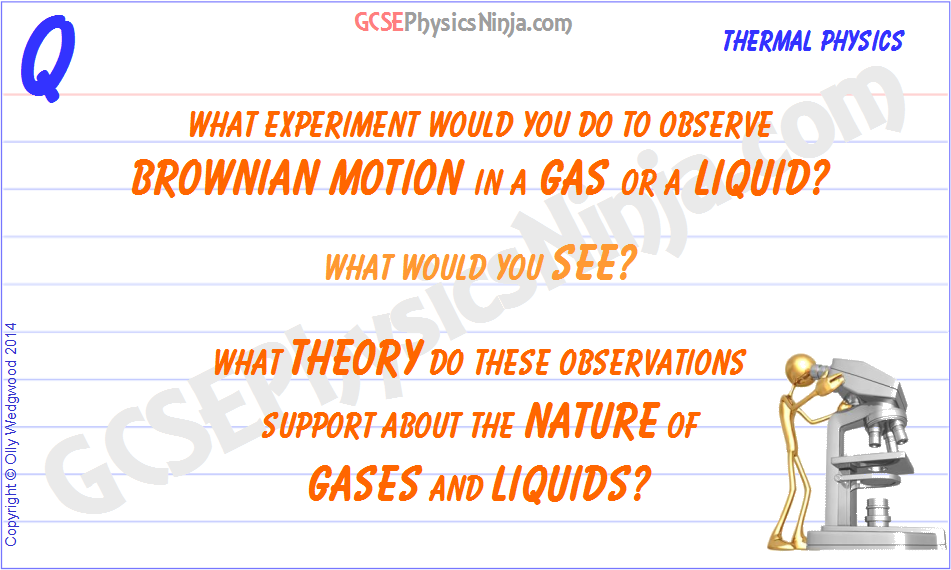 Brownian Motion: Evidence for a theory about the nature of gases and liquids

We're constantly surround by air molecules which are bumping into us, moving in random directions. In a liquid, the molecules or atoms are moving around each other, again, randomly and in a solid they're held in position and can only vibrate.

Well, one experiment which adds evidence to support this 'kinetic' theory is called 'Brownian Motion'. To set up this experiment, we need:

The smoke is trapped in the glass cell and the microscope is used to observe the motion of the smoke particles.

This random bombardment causes the smoke particle's 'random walk', which is evidence of the kinetic theory of matter - that gases and liquids are made up of tiny invisible particles that move randomly and collide with themselves and other objects.

You can also do this experiment with a liquid by sprinkling pollen grains onto water and then viewing the 'random walk' of the pollen grains with a microscope. 'Brownian Motion' is named after the scientist Robert Brown who carried out the experiment in this way.

This website uses cookies to improve your experience while you navigate through the website. Out of these, the cookies that are categorized as necessary are stored on your browser as they are essential for the working of basic functionalities of the website. We also use third-party cookies that help us analyze and understand how you use this website. These cookies will be stored in your browser only with your consent. You also have the option to opt-out of these cookies. But opting out of some of these cookies may affect your browsing experience.
Necessary Always Enabled

Any cookies that may not be particularly necessary for the website to function and is used specifically to collect user personal data via analytics, ads, other embedded contents are termed as non-necessary cookies. It is mandatory to procure user consent prior to running these cookies on your website.